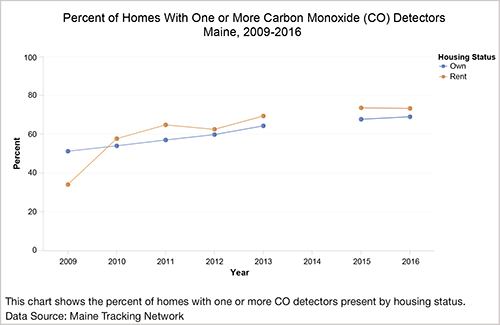 Carbon monoxide, or CO, is a gas that you cannot see or smell but can cause sudden illness. CO is formed from nearly all combustion sources such as those produced by oil-, coal- or gas-burning furnaces and appliances, stoves, gas ranges, or by burning charcoal and wood. CO poisoning in Maine often occurs when people use gas-powered generators improperly, work on running engines in enclosed spaces, or run heating appliances that are not maintained or have blocked vents. When the power goes out, sometimes people use alternative sources of heating or cooking inside like portable generators and charcoal grills. This improper use of heating and cooking devices can cause CO to build up in a home and lead to CO poisoning.

Every year in Maine, CO poisoning is responsible for 1-3 deaths and approximately 100 emergency department visits. Sixty-eight percent of CO poisonings occur in the winter months between November and March. The Maine Tracking Network provides data from 2001-2016 on CO-related emergency department visits and hospitalizations, data on CO-related deaths from 2001-2015, and data on the prevalence of homes with a CO detector from 2004-2016. While the best way to prevent CO poisoning is to not let CO gas build up in your home, having CO detectors with a battery back-up near every sleeping area can save lives and is especially important when heating your home. These data show that as of 2016, an estimated 70% of households in Maine had a CO detector, nearly double the percentage in 2004. 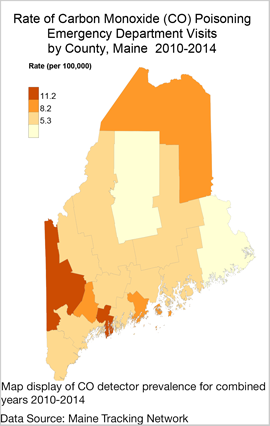 You can prevent carbon monoxide exposure.