May is Lyme Disease Awareness Month. To help Mainers prepare for tick season and prevent the spread of tickborne diseases, the Maine Tracking Network has released updated Lyme disease data through the year 2017. In Maine, 1,844 cases of Lyme disease were reported in 2017, an increase of 347 cases from 2016.

Also, for the first time ever, the Maine Tracking Network has published data describing anaplasmosis and babesiosis. Together in one topic area with Lyme disease, users can now explore data for these three diseases carried by the deer tick. See these data at the town, county, and state levels, for the years 2001-2017. 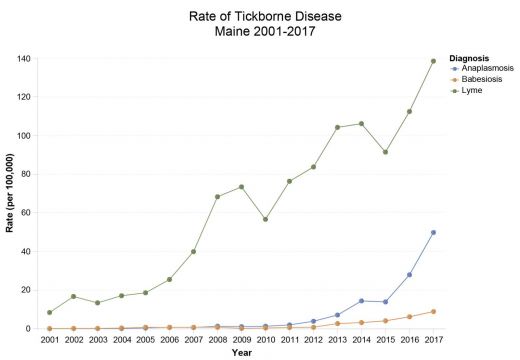 Using the interactive data displays in the portal, users will be able to see that while the number of anaplasmosis and babesiosis cases are lower than Lyme disease, cases for all three diseases have been increasing since 2010.